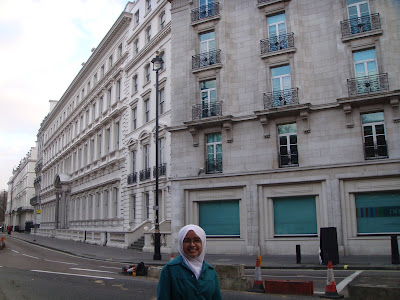 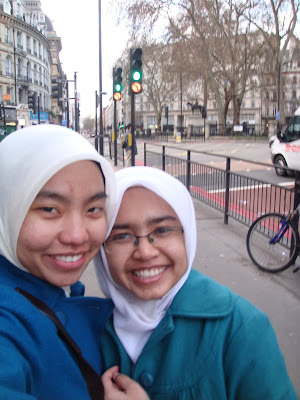 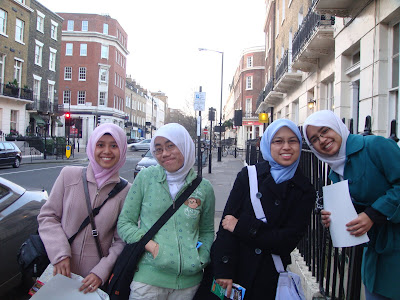 •The room that we rented out for that night was nice. A small hostel room with 6 beds (though we only reserved for 5). Plus, the receptionist was cute. Heheh. Love his accent. Finally, got to hear the British accent

•At first, we had problems to adapt to certain things-especially some terms. We used to call tandas as ‘Toilet’ back in Malaysia. But, it’s ‘Restroom’ in the U.S. We were jumping like small children when we saw the ‘Toilet’ sign in the Heathrow London Airport. Kanak-kanak kah kami?

•Buckingham Palace is not as huge as I imagine. This was merely my first impression. I thought the palace was bigger and the wall surrounding the castle was longer. The guards were the same, though. Sama yg aku slalu Nampak lam tv.Hehe.

•We were surprised with the number of CCTV around London. Just like Malaysians, CCTVs were everywhere. Maybe the vandalism rate was high, so they place the CCTVs to surveillance the area. Nih pon assumption jugak.

•There’s nothing scarier than riding the London subway..not because of the pick-pocket, but the metro door. Laju gle tutp. Siyes. I was almost hit by the door..almost jek

•Zawa, Peya and Ada ternoda!Hahah..suspen jek. I was waiting for them in a toilet when I saw a small girl was peeping into every other toilet rooms, including Zawa’s, Peya’s and Ada’s. Hehehe..sorry korang. Late warning. She’s so naughty and out of control. Her mom was helping her younger sister in one of the toilet rooms when this girl started running around. Me?Just had fun watching her.Haha

•It took us forever to reach the gate we supposed to board the flight in the London Luton Airport. You had no idea how long was the distance from the check-in counter to the gate. Siyes jauh.
Posted by YaYa at 1:42 PM