If I were the Ustazah...

Have you met the most honest person in the world? Well, kids can be pretty honest. Or it's safe to say they are the most straightforward creatures on earth. They express what they want and say what they saw. Haven't had any real life experience with honest kids? Here are some examples:

Mad Syah (my 5-year old little cousin) was in his kindergarten when Ustazah talked about 'pahala'. In that kindergarten, the first slot on Sundays and Mondays is for Islamic Education, while Iwa and I teach every Tuesday and Wednesday. We promised Mad Syah to bring him to his favorite gerai makan , called Mok Su Kedai Makan, that day. So, he's impatiently waiting for us to pick him up and had no will to study anymore.

Along said, if she were the ustazah, she would quit after the second day. Haha. But this ustazah is very persistent and patient. Dealing with small kids, she has 1001 ways to explain something to them. When one student asked, why don't we put the 'pengusung jenazah' in the grave, together with the dead body? I might go blank, but she funnily answered "Of course we can't do that. Someone wants to use it after this". If you were the ustazah, what will you answer then?
Posted by YaYa at 12:27 AM 8 comments:

A Day with Kindergarten Children

I know that my younger sis, Iwa, has been one of the teachers in my aunt's kindergarten. Well, of course it's a temporary position since she's already got admitted to UiTm Dungun at the end of this month. And it's been a long time since she offered me to teach with her...Her reason was? Dah tak tau nak ajar apa and budak2 makin nakal...ekekek

So, I went to the kindergarten yesterday. My first impression was? Well, the kids were nice.They sat quietly at their own seats and patiently wait for the class to begin. Mad Syah, my lil naughty cousin,who's also a student in that class, also behaved well-which made me felt a bit uneasy and weird..But then my sis whispered to me, don't be fooled by their action. It's too early in the morning that they hadn't warmed up yet. Plus, some of them were still having the post-school break syndrom...So, I kept her advice on my mind..

Can you imagine how fast a kid can change? Not even 10 minutes after my sis's reminder, all the kids were everywhere! Some were trying to turn on the tv to watch their favorite "The Little Mermaid"..two of them started a small, fake fight by pretending to be contenders in a wrestling match. And Madsyah? huh...he started showing hie true colors..hahaha..students were yelling from every corner. "Teacher...Madsyah khenat (usik)!". He once kicked a lil girl's butt and throwing a piece of paper to the other friend-just the same naughtiness he showed at home.

But one thing for sure, all the kids were so cute.They called me and Iwa as teachers since we taught English. Some of them love to get attention from the teachers, so they would constantly ask questions and would sometimes kiss our cheeks. How cute kan.Some just silently sat at their seats and finished the worksheet in no time. All the kids were so lovely and cute. Too bad I'm not feeling well today and couldn't meet them..Feeling bad since I already promised them yesterday...

Hopefully, I'll get to see them again next week..
Posted by YaYa at 8:14 PM 6 comments:

Well...I supposed to share about my weekend in KL, kan...this was what happened last week. I was going to KL with my sis. kononnye nak attend gathering Nubhan and Nubies club and also to meet some old friends that I knew on forum (twinkyyy...kikuu..waaa). Being so excited, we arrived at the bus station around 845 pm and the bus should arrive around 9 pm la kan...we found seats and chatted around with Mom's acquaintance (to be exact, he's my grandpa's nephew)..

From 9 pm...930 pm...still, the bus didn't come.Along then asked the clerk at the ticket counter and he said that all buses would be late that night since there was an accident at Bukit Tujuh.Apparently,it was a trailer crash that caused an extremely bad traffic around that area. The result was?Haa....bas tak sampai la. Even the morning bus(that should arrive around 6 pm) did even even disembark the passengers yet. Even worse? It's estimated the earliest time the bus would come was around 12 am.

So no point of waiting kan? Since we were all starving, we went to a nearby food stall to fill our stomach up. Then back to the station, there's still no sign of a bus coming..

Waiting a bus in the middle of night was surely a challenge. Nyamuk banyak seyhhh...We waited until 2 am before deciding to cancel the trip and go home since we won't be able to make it before the event..

And guess what's the first thing I did once I was home? Yeah..grab Shieldtox and sprayed around my room. Revenge la konon... 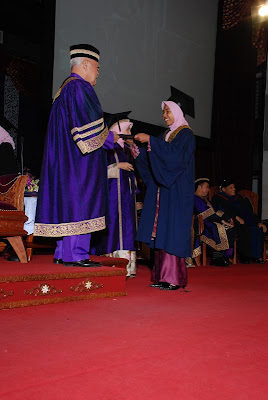 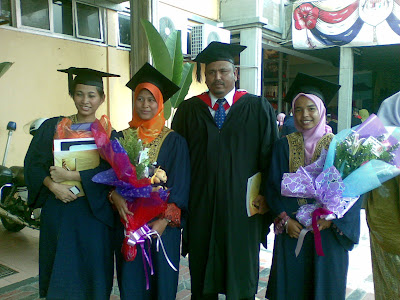 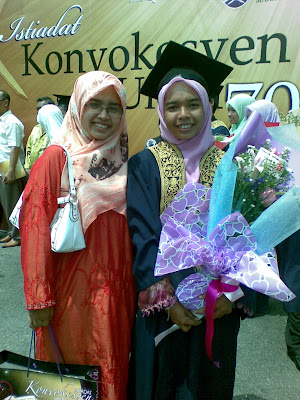 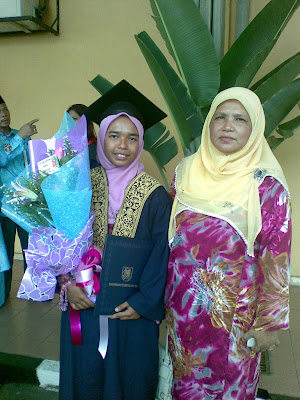 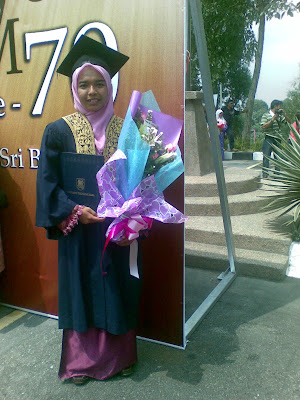 Excuse my procastination, my dear sis..after almost a week since your graduation then I only blogged about it (not to mention using your laptop and your own pics without permission..eheheh)

Yup..we went to Shah Alam last Wednesday to attend my elder sister's commencement at Uitm Shah Alam. It's good to see my bro and his girlfriend (Kak Saiem..how to spell your name ek??). It's a very hot day..and I was stuck in the waiting hall for almost 4 hours with mom..thank God I brought my newly bought novel (just finished reading 'Heaven, Texas' and now was bored to death due to reading deprivation). Oo..rupernye camnih gaya graduation UiTM..If you came earlier, you could secure a spot in the same hall as the graduates..if not you could only watch the commencement on the provided wide screen in the waiting hall, right in front the main hall.

It's a unique experience since that was my first time witnessing a commencement of my family member(Please exclude my bro's UM's graduation. I did nothing but waiting outside the hall and buying him a bouquet of flowers..ehehe). I could see the big smiles on the graduates' faces..yeah..it's a really big day for them. Whether they had to ride a wheelchair or wearing a cast when receiving the certificates, I guessed it didn't matter anymore..They graduated already!

I wish my sis could come to my commencement as well..though it's still uncertain. I definitely want my mom to attend it. But my sis/bro have to use their own money. PTPTN still ade kn, long?Hehehe..And Abg Yam could easily purchase a flight ticket if he saved a little.(He said he was already trying so hard to save..but his money went directly to his lil sistersss...ehehhe)

And next week, I'll probably spend my weekend in KL again. Agenda?Heheheh..to be story-story later laa...