Causes:
1. Kak Maziah went back to Melaka
2. Watched 'Secret Garden' until 2 in the morning

Btw, I alwaysss went back to sleep after performing my Subuh prayer. But today I just got an instinct that maybe a few Malaysian footballers who just lifted up the AFF Suzuki Cup will appear on MHI or something (Ashari mungkin??hehehhe), so i decided not to enter my dreamland.

And they did appear!!! Safiq Rahim was on MHI, Safee Sali + Aidil ke Zaquan ek on SPM and last but not least Apex on Nasi Lemak Kopi O. But, there's no Ashari ~sigh~

Safiq wa ssooo shy on television..well, of course I do not know his usual self, but he never look up straight to the camera that the cameraman had to focus from the side. Just wanna share one Safiq's 'hahaha+awww' moment:

LOL. It's sooo obvious that it's 'Dah kawen ke'-question-turn-into-'Isteri cakap apa lepas menang?'kannn. Now the whole Malaysia knows Safiq is still available, thanks to Fedtri. But, single is not necessarily available ye.
Posted by YaYa at 9:02 AM 2 comments:

When you have no other means to download dramas..

My office blocks the staffs from downloading files from megaupload and mediafire..and it's not something shocking since some companies even block the access to Youtube. So, these are tips for those who want to download any drama/clips/MV online, especially those who have no access whatsoever to major filesharing sites. I've been desperately cracking out my brain for the past few days to come out with the solution and wallaaa...it works.

I have both 'Free download manager' and IDM. but i guess IDM works better for me. Here's the link :


Completely install IDM until you receive the message that it's ready to be used!

2. Find any videos/clips that you sooo wanna download them.

On top right of the vid, you'll find the IDM symbol. Just click on it and it'll automatically download your vid. Well, it's no surprise that IDM works better with faster internet connection. And so much like FDM, you can have many simultaneous download at a time.

Note: The source of the vids can be from anywhere and it's not only restricted to Youtube.

Credits to my big bro, Abe Yam, who installed this amazing IDM in my laptop.Oh, forgot to mention. The default location of your files will be in My Documents->Downloads->Documents/Videos/Compressed/Program/Music

Happy downloading!
Posted by YaYa at 12:01 AM 9 comments:

Well, the thing was I was trying to make one of my all-time-favorite kuih-cik mek molek. For those who do not know this kuih(I bet you know it, you may not recognize the name), it's made of sweet potato (keledek), flour and when you shape it, you have to put a little sugar in it.So that when you fry it, the sugar will melt inside the oval-shape cik mek molek and tadaa....you'll deliciously feel it's melting inside your mouth.

Yes, I did call my mom just to make sure my steps were right. i've been watching her making cik mek molek over the years (shame on me for screwing up one of my mom's best kuih). So, i started boiling the hot water, and the potatoes were cooked well ( I deemed they were, eventhough they're a bit..lembikk). the point was after making sure the keledek was completely mashed, I keep on adding in flour because the mashed keledek just won't harden! I tried shaping it, but i guess there's no use doing it because it's really not my day. I felt bad for the keledek for being the victim of my 'nothing-to-be-proud cooking skills'. So ended up adding a bit milk (condensed and evaporated), finely and nicely spread them in a baking pan (bowl?container?)and baked them. I had little hope left that at least it wouldn't turn out to be a disaster. Well, fortunately it's not. I took a bite of it, zack and zawa, too. Haha. Poor them. My keledek diversion supernew invention was still quietly sitting in my fridge. Looks like I have to wait for my mom to come and teach me how to make cik mek molek again.

Bonus: My cik mek molek would look like this (IF everything turned out fine) 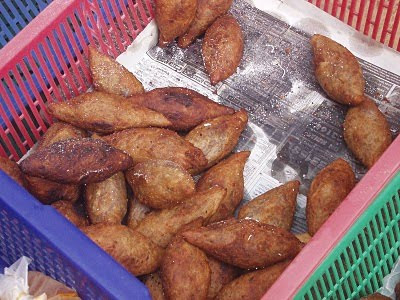 credits to http://mohdzawi.blogspot.com/2008/01/foods-of-kelantan-part-1.html for the picture
Posted by YaYa at 2:49 PM No comments: